A drive to heal as a year of jubilation awaits

Brittany Loring needs a water break and a minute to catch her breath. She’s been doing a series of leg lifts for 20 minutes. “It’s burning like I was at the gym,” she tells her physical therapist, Erin Saulnier. 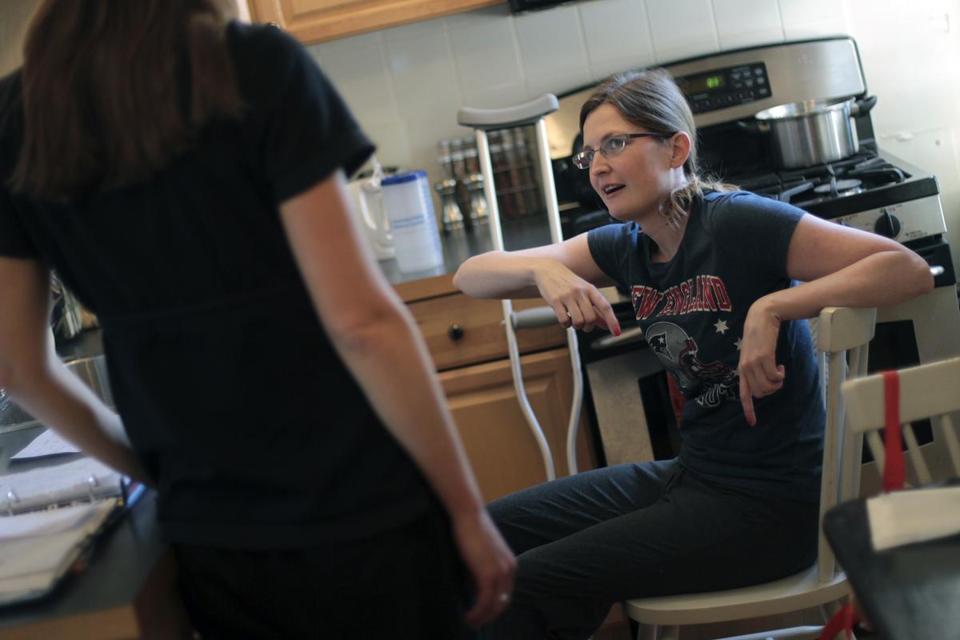 But this isn’t a gym. It’s Loring’s kitchen, and her session isn’t quite over yet. “Try to keep your knee straight and your toe pointing forward,” Saulnier says before giving her patient a quick respite. Then, it’s back to work — squats using the kitchen sink for balance and practicing shifting weight from one leg to another.

Three times a week for the foreseeable future, Loring will strengthen muscles weakened after twin bombs exploded at the Boston Marathon. Her body was riddled with shrapnel, which fractured her skull, tore three large wounds into her legs, lodged a pellet in her throat, and burned her skin. Some of the metal shards are irretrievable and remain inside of her.

In homes and rehabilitation centers across the region, Loring and other bombing victims are taking their first steps toward healing. People are progressing from using walkers for halting steps, to crutches, to eventually needing nothing.

Loring used one crutch to move from room to room in her Cambridge apartment on this day, stitches still holding together a deep, 5-inch cut above her left knee. The sutures would be removed later.

“Are you nervous about having the stitches out?” Saulnier asks as she leads Loring through an exercise to bend her knee.

“Yes, I feel like my leg is going to open up,” Brittany responds.

“No. No. They wouldn’t take them out if they weren’t ready,” Saulnier assures her.

Loring’s goal is to walk unencumbered at Boston College’s commencement next week, when she will earn dual degrees in law and business. Her absolute deadline, though, is September.

“I’m getting married,” she said the day before her physical therapy session. “I definitely want to feel steady on my feet by then.”

She’s making progress. Now, Loring no longer needs assistance to walk through her home, though she still depends on her single crutch when out in the world.

Marathon Monday was Loring’s 29th birthday, and she went to watch a friend race. Her fiance, John McLoughlin, headed to watch the Red Sox. They kissed goodbye and went their separate ways, planning to meet later to celebrate.

After the game, McLoughlin was passing the time at a bar when the televisions showed a huge cloud of smoke near the finish line. Immediately, he sent Loring a panicked text message: “Are you there? Are you OK?”

It would be nearly half an hour before she responded: “Hurt at Boston Medical Center.”

“I just ran out of there,” he said. McLoughlin said a friend stepped in front of a car and yelled, “You have to drive us to Boston Medical right now.”

For the next five hours, McLoughlin and Loring’s mother and one of her two sisters sat in an adjacent building and waited. He wondered in what condition she would return, the tall, thin woman with light brown hair he met nearly 10 years ago in college.

His mother, a case manager at Boston Medical, prepared them for what they would see: bandages, bruises, burns. Loring was alive and talking, which allowed her fiance “to dismiss a lot of the wild thoughts, extreme thoughts.”

Loring’s father, Dan, was on vacation in Mexico when the bombs detonated. He had just left the gym and was in his hotel room when breaking news alerts about the bombing began buzzing on his cellphone and computer.

He knew Brittany was at the Marathon, so he called.

Nothing. He sent a text. Nothing. He tried McLoughlin, Brittany’s sister, and his ex-wife. “I couldn’t reach anybody,” he said. Then, he got the same text as McLoughlin and he knew things were bad. His daughter never would have used the word “hurt” if her injuries were minor.

“I was running to the door in a bathing suit and flip-flops,” Dan Loring said. Realizing he was nearly naked, he changed, grabbed his wallet and passport, and then left. He barely made the last flight back to Boston, which left in one hour.

He arrived at the airport with minutes to spare, but no one was at the ticket counter except for a custodian. Dan Loring frantically explained that his daughter was hurt and he had a plane to catch. The man found several supervisors, and Dan Loring was forced to explain — again. They didn’t understand and all he could think to say was: “Turn on your television!”

Loring went to the race with one of her best friends, ­Liza Cherney, who is also an MBA candidate at Boston College. They’d stopped by the Cactus Club on Boylston Street before stepping outside. It was a gorgeous day. “Who wants to be in a bar all day when it’s nice out?” she remembers thinking.

Another of their business school classmates was running to raise money for charity and was supposed to pass about 2:45 p.m. “We watched her run by, and we were all excited,” Loring said.

They headed to the finish line to meet her when Loring saw some guy and got a weird feeling. “Sometimes you see someone who creeps you out and it’s like, ‘Oh, what’s the worst thing that can happen?’ ”

The next thing she knew, a wave of energy hit her body, knocking her to the ground. She pushed herself up and started to run, passing a storefront window. What she saw caused her to start “freaking out” — blood oozed from her forehead.

The first person she asked for help was a woman who appeared to be in shock. So she kept running until three men approached. “We’re going to help,” she remembers them saying. They sat her down, saw how severe her left leg was injured. One man took off his jacket and used it as a tourniquet, leaving his keys in the pocket.

A fourth man, a race volunteer, appeared with a wheelchair and pushed her to an ambulance. She was at the hospital less than 10 minutes later.

Loring had three surgeries in six days to repair damage caused by shrapnel. Cherney, her classmate and friend from California, went to a different hospital with similar injuries.

Loring is taking her recovery day by day.

“I have a pretty big year coming up — graduation, taking the bar, getting married, and starting a new job,” she said. “This just got piled on.”

But everything, she said, “will be OK.”

Akilah Johnson can be reached at ajohnson@globe.com.